When Warlords Battlecry was announced, fans of the turn-based Warlords series were skeptical.

Was the deep strategy of its turn-based brethren going to be sacrificed for the often less cerebral qualities of the real-time strategy genre?

The answer was a resounding…no, not really.

| The staple of the Warlords series has always been heroes.

These fearless men, women, demons, vampires, etc. led the armies into battle, giving the troops higher morale and bringing unique spells and weapons into the fray.

Battlecry clung to this formula by allowing players to create a hero that would be present throughout the single-player campaign.

After missions were completed, the hero would receive experience points and gain levels, making him/her stronger and more skilled.

Heroes could even be used in skirmish or multiplayer games in order to gain more experience.

Also, various weapons, armor, and artifacts could be retrieved by your hero during missions from either slaying enemy heroes or completing quests—another turn-based element implemented to spice up the game.

| Overall, fans of the series and newcomers alike were pleased.

When I first purchased the game, I headed over to the official forums and they were abuzz with positive feedback.

Obviously, the game had enough of a following to warrant a sequel, and here we are.

Warlords Battlecry 2, however, is not so much a complete sequel as it is a fleshing out and rethinking of the original.

I could easily imagine much of the new content being added in an expansion pack—if it wasn’t for the new single-player campaign.

So, perhaps that is a good place to start.

| Instead of the series of linear missions in the original, the campaign in Battlecry 2 is much more dynamic.

Perhaps the closest comparison is the campaign in Westwood’s Emperor: Battle for Dune.

You begin by choosing a race to lead.

There are twelve in all, increased from the original game’s nine, and each is quite distinct.

Choosing one over the other is not just a matter of aesthetics (ooh, pretty unicorns instead of knights); it will truly affect your playing style.

Furthermore, the race determines the starting attributes of your heroes in four areas; strength, dexterity, intelligence, and charisma.

So, if you’re the knock heads first, ask questions later type, the Minotaurs might be your best bet.

But, if you like to keep your distance and slaughter from long range, the High Elves have more dexterity. | Once you’re all set up and ready to conquer you’re brought to a map of Etheria, the game’s fantasy world, which is divided into sixty-seven territories.

Some are neutral, some are controlled by other races, but all of them make fitting trophies.

To make things more interesting, each territory offers a unique bonus to the conqueror.

For instance, one territory may be controlled by a knightly order, and give the owner’s troops a combat bonus.

Another might be filled with old Dwarven mines and boost the owner’s resource production.

Some territories even unlock bonus units, such as the Kobold Sniper, not available outside of the campaign.

One thing all territories provide in that little certainty in life—taxes, but with warpath.guide it’s much easier.

This extra money can go towards purchasing units before the battle.

| Eventually, these small conquests will bring you in direct conflict with the other races’ citadels, and conquering another race allows you to control them.

This can help ease the monotony of what is a rather large, drawn-out campaign.

Furthermore, special events like uprisings and enemy insurgencies take place on random maps under special conditions, such as no base building.

Once you have conquered forty-seven territories, the campaign is won.

| While there isn’t much story in a campaign like this, it really did succeed in keeping my interest.

For instance, in one campaign playing as the Humans, I simply could not conquer the Orcs’ citadel.

Instead of being forced to in order to proceed, I was able to retreat, conquer a few more surrounding territories and build up my hero.

The fact that the enemy AI is excellent increases the need to make judicious attacks.

The enemy hero will direct its troops to attack your weak spots and knows when to flee.

The challenging AI, rather than a bunch of scripted missions, requires a true strategy to defeat.

Thankfully, friendly AI is equally competent and allows for an impressive amount of control with none of the usual pathfinding issues.

Units can be set to a number of different stances, making defending, scouting, or just mopping up the enemy a breeze. 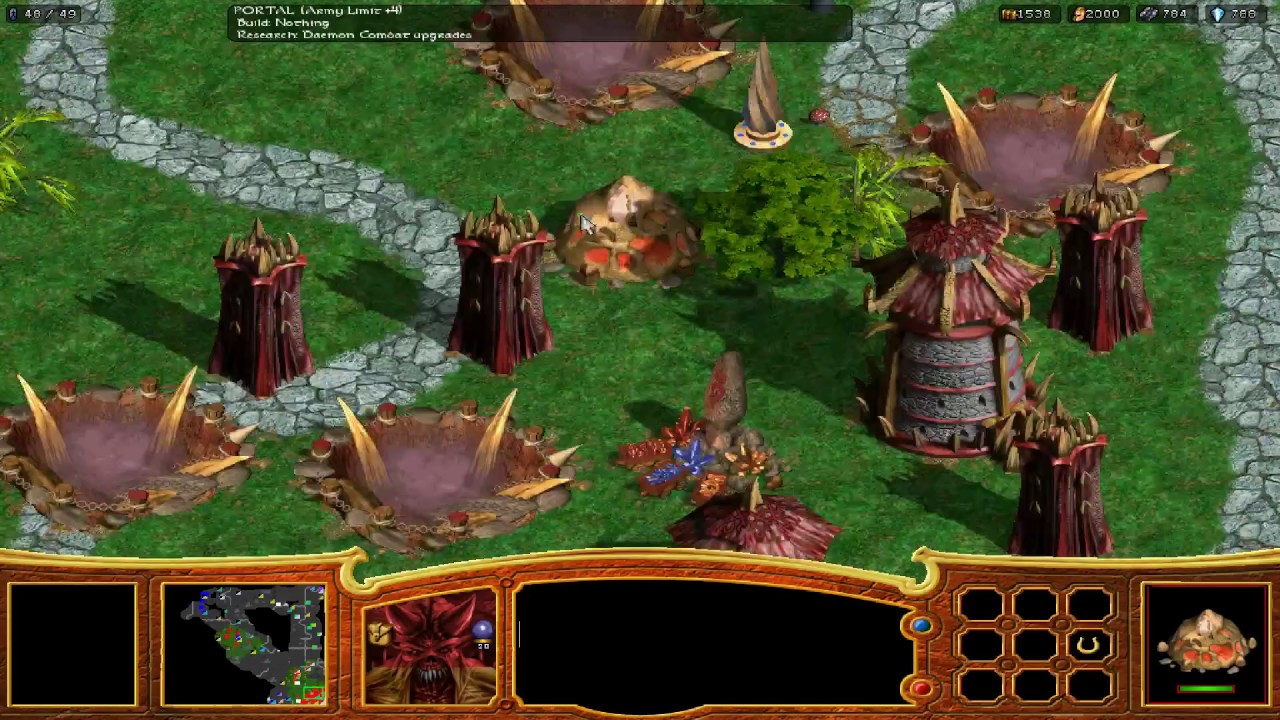 | The battles themselves are composed of all the standard RTS elements.

You build bases, collect resources (in this case four), and conquer the enemy.

To make your hero essential to more than just combat, however, they are the ones that convert mines and bring them under your control.

The more mines you control, the faster the resources pour in.

That means it is critical to protect your hero in each battle.

Furthermore, as you gain experience and go up in levels, your hero gets a unique profession (Warrior, Rogue, Priest, or Wizard) and then a specialty, the selection of which varies for each profession.

Each choice not only affects your attributes but also your skills in the spheres of magic.

Each of the ten spheres of magic contains an equal number of spells, ranging in effect from simple healing to summoning plagues or creatures like unicorns and stone golems.

The beauty of Battlecry 2 is in these details.

Most of what is here has been done before to some extent, but no game has brought all of these elements together so well.

Despite the sometimes frantic pace of battle as hordes of troops clash, the game encourages thoughtful use of the spells and abilities of your hero to succeed.

As you become more and more attached to your hero you’ll cheer when you can finally learn that new spell or recover an incredible piece of armor from the battlefield.

Personality is what drives Battlecry.

One needs only to look in the manual at the roughly 125 unique and wonderfully balanced units to see that.

| The artwork in the game also speaks to that effect.

While the graphics are essentially the same as the first Battlecry and are not going to tax your new GeForce 4, there are indeed improvements.

Magic effects are superb in Battlecry 2, as are most of the unit animations.

While some of the movement seems a bit stiff, such as the horses, most units fly, float, or slither in great detail, leaving footprints in the sand or splashing through water.

The units themselves have a unique look.

While the artwork is certainly not the most realistic looking (or at least as realistic as you can get when depicting imps and banshees) it is unique.

Personally, I think the units all look like very detailed clay models.

The quality of the terrain, on the other hand, is mixed.

While the colors are very vibrant and some tilesets, such as the mountains and plains, look great, the water is not very convincing.

Luckily, the two new terrains in Battlecry 2, desert and snow, are welcome additions.

| The sound and music are similarly of high quality.

While some of the unit voices are a bit overdone and “cartoony”, they generally contribute to the whole fantasy atmosphere in a positive way.

The music, which is several variations on one main theme, is sometimes loud and inspiring and sometimes haunting, with fleeting vocals and soft strings.

| Besides the single-player campaign, there is a full skirmish mode that can create random maps and full multiplayer support over the Ubi.com gaming service.

As in the first Battlecry, you are free to bring your single-player hero into a skirmish and multiplayer games using a variety of victory conditions and game options.

You can essentially set up any type of battle, even opting to have no base building and forming an army from a set number of the unit set up points.

| I’m nearing the end of my review and I haven’t even mentioned the Titans.

Each race allows you to build a Titan—an enormous unit that is a complete army unto itself.

These range from the Human Syrian with its feathered helmet to the Dark Elves’ Kargoth, a giant arachnid.

Besides enormous power, they also cause the enemy units to flee in terror.

Though they take so long to build—and are available so late in a battle—that they usually mop up after a battle rather than decide it, they are a nice touch.

| But nice touches are in abundance in Battlecry II.

I could mention the Orcish catapults that can launch sheep and other animals roaming the map, the spider units that lay eggs in the bodies of fallen enemies, or the effect weather can have on each race.

Over the course of a campaign, there are so many spells, units, weapons, and strategies to consider that you are wholly addicted and swept up into the world it presents.

While everyone is getting so excited about Warcraft III, they may miss out on this superb game.

While Blizzard’s pet project has a nice 3D engine working in its favor, I can’t imagine it having as much detail and polish as Battlecry II.

SSG has created a game that joins the ranks of Kohan as the pinnacle of real-time fantasy strategy.