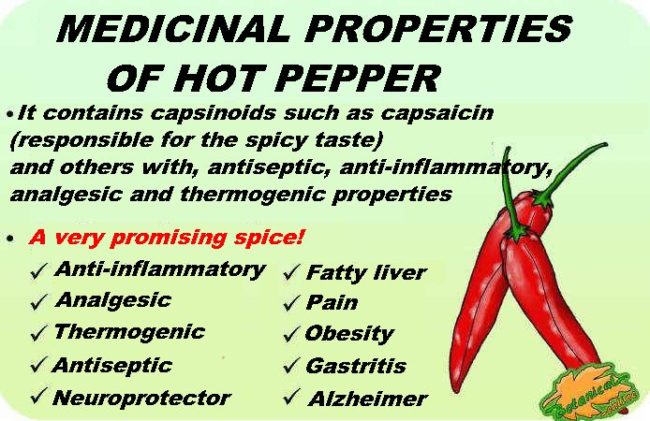 Because chilies have antibacterial properties, they have often been used to help the body battle it out with infectious diseases. Chilies actually stimulate the acids in our stomach, and this action will destroy bacteria. Peppers have been known to be eaten to fight the common cold due to the fact that they are high in vitamin C, but did you know that chilies have been shown to successfully fight dysentery and cholera.

We know that the substance in chilies that gives them their heat is called capsaicin. Capsaicin has been documented to desensitize the nerves in our bodies. This property can actually work to lessen the severity of pain on the body. It is in this way that chilies are sometimes used as an analgesic.

Capsaicin has been shown to increase the blood flow to the lining of the stomach as well as increase the amount of mucus which lines the walls of the stomach. Scientists have proven that this over-production of mucous created by long term use of capsaicin helps to guard against stomach ulcers.

Clearly, people who are accustomed to eating spicy foods will reap the benefits of the healing powers of chilies and peppers, but others can share in the benefits as well. If you are the type to normally shy away from spicy foods, you could try taking out some of the "heat" in chilies and peppers when you cook with them. Opt for green, yellow and red peppers or bell peppers as they are sometimes called, because they are not usually hot. If you want to make a less "heated version" of a spicy dish, you can lessen the heat by removing the seeds from chilies before adding them to the recipe, because the seeds are where the majority of the heat is contained. Chilies and peppers are usually low in cost and high in nutrients like vitamin C, E, potassium, and beta-carotenes. The next time you are in the grocery store, pick up a couple of peppers and chilies and eat them regularly for a healthier body.